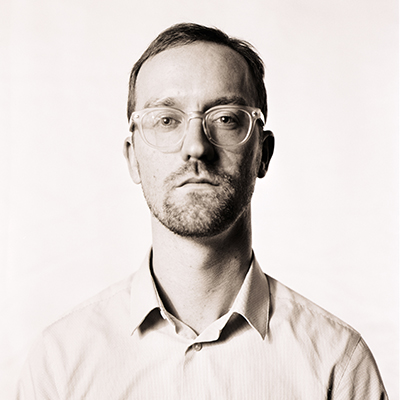 Filmmaker David Bernabo discusses the making of his new documentary, In a Dark Wood, which premieres at the JFilm Festival on Monday, May 30.

David Bernabo is a documentary filmmaker, musician, dancer, visual artist, and writer. His recent documentaries include a four-film documentary series called Food Systems (2014-2016), the culinary travelogue The Vacation (2017), the food and labor film Eating & Working & Eating & Working (2018), and a history of the site-specific museum, Site-Specific: A History of the Mattress Factory (2018). His most recent project, In a Dark Wood, charts the path of composer Mathew Rosenblum’s “Lament/Witches’ Sabbath,” a highly personal concerto written for world famous clarinetist/composer David Krakauer.

Film Pittsburgh: We don’t often intimately get to know the stories behind orchestral compositions. How did you first engage with this story and what spoke to you about it?

DB: In a Dark Wood came together very casually and very easily. I saw Mathew Rosenblum at a concert and he told me about this concerto that he was writing—a tribute to his grandmother and her story of fleeing Proskurov, Ukraine with her family ahead of a massacre in the town. I thought that it would be interesting to make a film that followed the life cycle of a musical composition. Also, I had just finished a four-film series on food culture and wanted a change of pace. The food films included over 60 people, so the idea of a small film, centered around a handful of characters, was appealing. Mathew had supported the food films (he liked the aesthetic) and we’re both easy-going people, so I asked if he’d like a film made about his new concerto, and he said yes.

I think Mathew’s concerto works especially well for the film, because it combines a number of things. There’s the backstory about his grandmother, which provides an emotional grounding for the film. There’s a reconvening of old friends since this piece was written for Mathew’s childhood friend, (world famous) clarinetist David Krakauer. That relationship allows the film to dive into New York City and the jazz scene of their adolescence. There’s the concept of migrating from one’s home country to America, which is especially relevant now, given the current administration’s blatant xenophobia. So, this is a story about a concerto, but many topics are pulled into the universe of the film.

You never know where a documentary will go when you start it, but this one seemed to have enough initial ingredients to bear fruit.

FP: Can you talk about your background/relationship with music and how that may have evolved in the process of making this film?

DB: Long before my filmmaking career, I was—and am—a musician. I was trained classically on piano until I temporarily gave it up to learn guitar and play in adolescent rock bands. After that, I’ve been in more rock groups, free improv ensembles, duos, trios, quartets, and have written a few chamber music pieces and scores for dance performances and film.

Since 2007, I’ve been somewhat of an outsider (having a degree in finance instead of music) looking in on Pittsburgh’s emerging new music scene—attending concerts, recording projects for people, and now sitting on a few boards of newer ensembles. But I’ve known Mathew for a while, and our friendship has grown organically over a number of years of me attending Music on the Edge concerts. So, I knew what I was getting into, having heard a good bit of Mathew’s music before starting this project.

There was a research phase to making this film, followed by trial and error in how to represent Mathew and his new concerto. How concretely should the process of composing be shown? Where is the balance between making a film for other composers and making a film for a general audience? Do I stay within the inner circle of the piece (Mathew, David, conductor Gil Rose) or do I include opinions from music critics, family, fellow musicians? What filmmaking approach allows the music to retain mystery, openness?

I reviewed how other filmmakers handled stories about composers. Composer Robert Ashley made a great series of films called Music with Roots in the Aether in the mid-seventies. Technically, they were considered “operas for television,” but essentially, the seven films were a mix of longform interview and longform performance with composers like Pauline Oliveros, Philip Glass, and Alvin Lucier. Then there’s Scott Hicks’ Glass: A Portrait of Philip in Twelve Parts, which some folks call a hagiography, but I really love that film. It’s intimate, and it increased my appreciation for Glass’s music. Frank Scheffer’s Helicopter String Quartet about Stockhausen and the Arditti Quartet performing Helikopter-Streichquartett is a wild film, an interesting example of editing a contemporary performance. 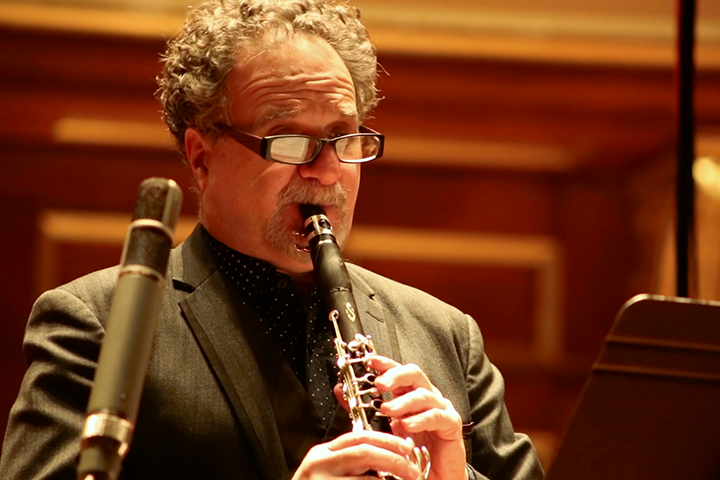 FP: There are multiple layers of storytelling at play—Mathew’s grandmother telling her story, him translating that story into music, you translating those stories through film. How did you navigate and nurture those layers in your process?

DB: It is interesting to view those three types of output side-by-side. Mathew’s grandmother’s lament—that spoken-sung story of her migration out of Ukraine—conveys a certain emotion and immediacy because of the way it’s delivered. When Mathew translates that influence—and literal voice—into the concerto, the message picks up Mathew’s microtonal scale, his compositional aesthetic. When David Krakauer enters the picture, the concerto adapts to his playing style, and he adds elements from his history with Klezmer and jazz music. Then I inject my sensibilities into how this whole process is being documented.

So, each of us is bringing our own experiences and aesthetics to our respective products, but at each step, we are also influencing each other. Mathew was still writing the concerto while we were filming interviews, so he is having to think critically about the “hows” and “whys” of this piece while it is still in formation, still to some extent an abstraction.

For me, in making the film, I’m just trying to let those things happen naturally, and not manipulate the interviews that I’m capturing, not force scenes or interactions—just trying to be true to the process.

FP: The importance of relaying and commemorating stories of immigration comes up several times in the documentary. Did the current political climate influence the way you told that part of this story?

DB: Certainly. I’d like to answer from my perspective of making the film, and not presume Mathew or David Krakauer’s intentions.

We started filming on November 30, 2016—right after the election. Mathew already had a good bit of the piece composed. So, for me, the piece initially felt rooted in the past. Anti-immigration stances, white supremacy, anti-Semitism—these things are not new issues, but as the months went on, the parallels between Mathew’s grandmother’s experience and the experiences of today’s U.S. immigrants seemed a lot closer, more direct.

In 1919, many towns in Ukraine (and other areas) were subject to the pogroms—anti-Jewish persecution that resulted in looting, raping, murder. This was a form of political warfare—one that we still see today in some countries, including our own. And now, with the current administration continually showing thinly-veiled support for white supremacist groups, the parallels are easier to draw.

Over the course of filming, it felt necessary to include conversations about immigration, to draw those parallels between 1919 Ukraine and the U.S. today.

Visually, there are a few blunt messages, but overall, the film opts to convey a message about the need for compassion, tolerance—basic human values. 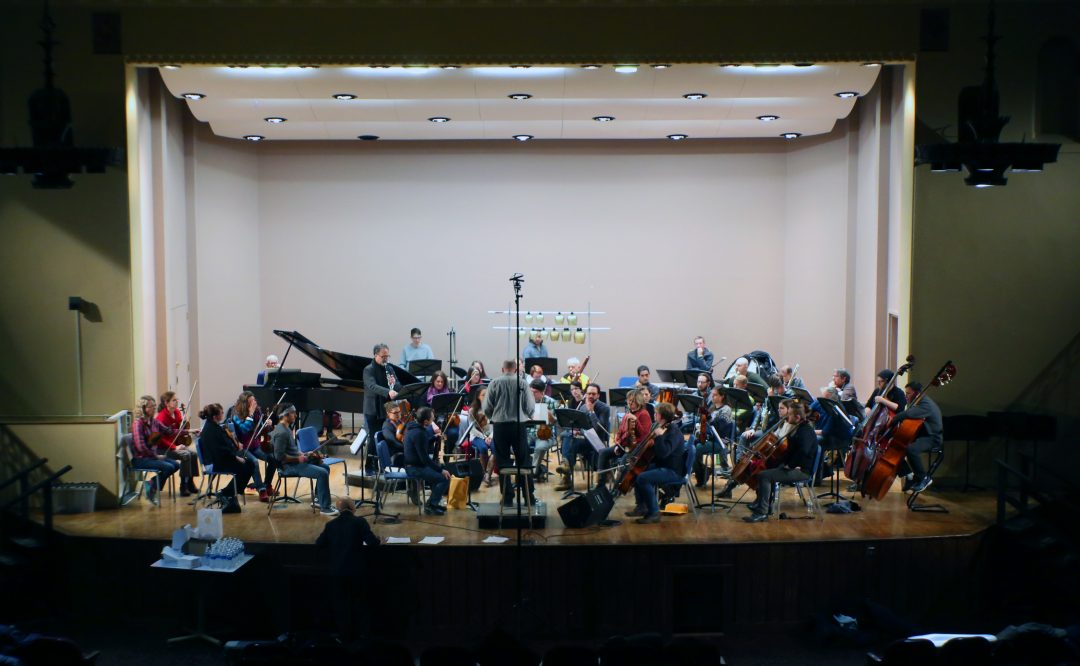 FP: What surprised you most—about filmmaking or the subject or yourself (or all of the above)—while you were making this documentary?

DB: I like seeing how things are made, so it was great to see how large orchestras are recorded, how Mathew approaches composition, and how David Krakauer’s involvement altered the path of the piece.

The thing that I love about filmmaking is the personal connections that you make with the people in the film. Filmmaking is very social—I mean, yes, it is 200 hours of editing in a room by yourself, but lifetime friends have emerged from my filmmaking process.

But the most surprising thing was the ease of completing this film. Shortly after starting this project, a few opportunities arose, and before I knew it, I was making five feature or TV-length films at the same time. At this point, four of the five are finished, but I was unsure of my ability to do them all justice. Luckily, all of the interviews and shoots went smoothly. I didn’t lose any footage, and the audio was nice and clear for the interviews and the ensemble recordings (shout out to HearCorp for engineering the premiere concert). So, it was an incredibly enjoyable and rewarding process!

David Bernabo will speak after the world premiere of In a Dark Wood on Monday, April 30 at 7:30 pm.