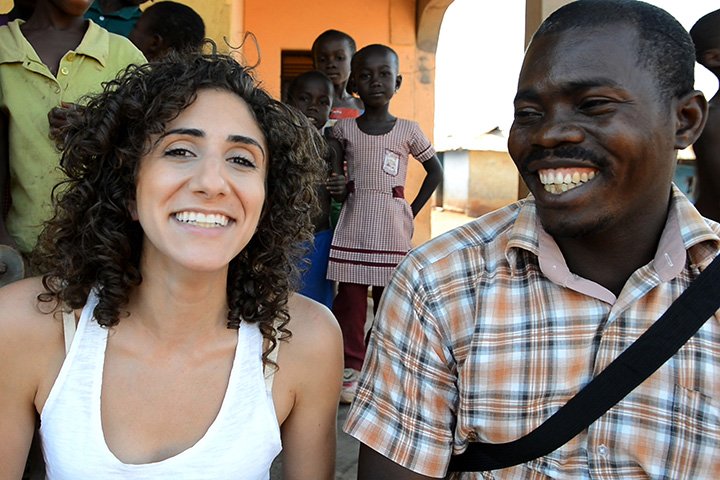 In her documentary, "Doing Jewish: A Story from Ghana," Zilkha parallels the stories of her African travels with the journey of her own faith.

When Gabrielle Zilkha volunteered to work in Africa, religion wasn’t at the forefront of her mind. But when the Jewish New Year came along, she found herself a lone Canadian Jew awash in a sea of Christians—that is, until she stumbled upon a group of practicing Jews in a remote town in Ghana. From there she launched a surprising and enlightening exploration into the lives of these African Jews that sheds light on dominant Jewish stereotypes and informs the ongoing discourse about globalization. In her documentary, Doing Jewish: A Story from Ghana, Zilkha parallels the stories of her African travels with the journey of her own faith.

Gabrielle will be joining us for a conversation following the April 28th screening of Doing Jewish. In the meantime, she kindly answered some questions about her experience making the documentary.

Film Pittsburgh: You admit early on that you’re one of “those people looking for meaning in their lives so they get up and go volunteer in Africa.” Did you enter into that voyage of self-exploration more as a filmmaker or a traveler? How did that change over the course of your travels?

Gabrielle Zilka: I entered that exploration for my personal and professional development. At the time, I was interested in pursuing a career in international development and was fortunate enough to get an internship with a kickass women’s rights organization called ABANTU for Development. The internship was part of a work abroad program with the Canadian International Development Agency.

In reference to the self-deprecating line in the film....I think I fall squarely into the category of “one of those” liberal, educated, middle-class, well-intentioned millennials who wants to see the world, expand my horizons, learn about different cultures and is privileged enough to be able to access opportunities to do so.

That being said, I would be lying if I didn’t say I had my filmmaking hat on. I did go with my gear and was always looking for a story.

FP: It was surprising to see the stereotype that all Jewish people are rich had made its way to a remote village in Ghana. What were some of the more surprising ideas about Judaism that have crossed these cultural lines?

GZ: I too was surprised to see this stereotype—especially given that other stereotypes about Western Jews didn’t seem present amongst the Sefwis…I think they were perhaps more surprised by outside Jews’ division between cultural Judaism and religious Judaism. That division does not exist in Ghana. There is no such thing as a “cultural Jew” in Ghana. The religion is the culture. So we had some interesting debates off camera about that!

FP: Your conversation with MaNishtana touches upon the representation of Jews in the media being the “Barbara Streisand, Woody Allen, Jerry Seinfeld kind of Jew.” Did you feel a sense of responsibility with this film to help break down these stereotypes and diversify that representation?

GZ: I wanted to hold a mirror to my audiences and push them to examine their assumptions: why are we surprised to hear about a Black Jew in Africa, for instance? Why do we ask “are they really Jewish?” about some and not others? Where do our dominant ideas of what a Jew looks like come from? I wanted audiences to ask themselves these questions and learn about how such assumptions can negatively impact others like the Sefwis or, in the North American context, Jews of colour.

MaNishtana was a great person to speak to about this topic because he helps ground the discussion in a local (North American) context. Also (and this is more apparent in his writing which I highly recommend!) the way he straddles these two identities—black and Jewish—with humour and insight, I find makes him very relatable.

FP: The documentary grapples with the rigidity/fluidity of the “borders” around Judaism. Has the response to your film incited any further discourse about Judaism and globalization?

GZ: The Sefwis’ story is a story of globalization. I wanted to make this explicit in the film. I’m unsure whether that means the film has contributed to a larger significant discourse about Judaism and globalization as much as it may have contributed to discussions. And that’s good enough for me! If I can get my audience members to have discussions around the table about how globalization has impacted the Jewish identity and our sense of community, I consider the film a success! I find this topic fascinating!

FP: The Ghana storyline parallels the story of your own relationship with religion. Did you debate how much personal narrative made its way into the documentary, or was that an important factor from the beginning?

GZ: OMG…I’m telling you. Until the very last minute of recording voice over in the post-production studio when everything was “locked” I was making changes to my narration and continuously questioning whether to erase or add my place in the film. There is a fine line between “Oh fun, this white Canadian Jewish chick is on a journey of self-discovery and sometimes she cracks jokes” and “Girl, this is documentary voice-over not your JOURNAL—tone 'er down a notch.”

I always knew I wanted to include my journey in the film because it was important to me ethically to own my perspective. In documentary, it’s very easy to present YOUR truth as THE truth and the audience is none the wiser. I wanted to be explicitly clear that even though it is the Sefwis’ story it is my perspective—we are learning about them through my Jewish lens. I also knew that the Sefwis’ journey was too meaningful to me, it impacted me too much, to not at least try to communicate that personal meaning to my audiences.