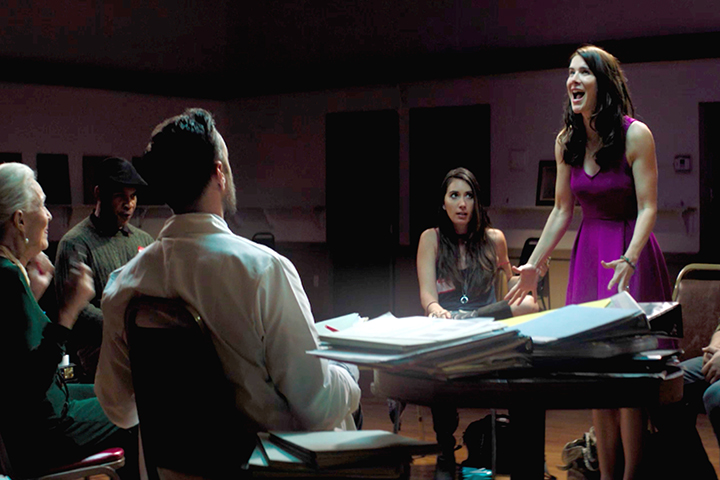 Molly Beucher wrote and stars in Eulogilia, a dark comedy about a woman grappling with her addiction to eulogizing the living.

Read about her thoughts on Wes Anderson, creative freedom and talking to strangers.

Film Pittsburgh: If Eulogilia were the offspring of two other films, who are its parents?

MB: Oh boy, this is a tough one! Fight Club is one of my personal favorite movies. I loved all of the rules it broke and it's one of those movies that I could watch 100 times and never get sick of it. It really influenced specifically the therapy scenes in my film. The other film that really inspired me is The Grand Budapest Hotel, not so much in its style, but rather the bizarre and yet 100% believable specificity of Wes Anderson's characters. His movies are living proof that you can get away with anything in terms of storyline or character kookiness as long as you really commit to it.

MB: I absolutely love working in short form because I feel you have much more creative freedom than you do when making a full length feature. You can convince anyone to watch something for 15 minutes as long as it's engaging and well made. Therefore, short filmmakers have this unique power to really push the edges of reality/the norm and create these beautifully bizarre, wildly intense, or hysterically peculiar little microcosms of theatrical enjoyment.

MB: Everyone remembers their first really disturbing horror film; mine was Cape Fear. I didn't sleep for a week!

MB: Make movies- make good movies, make bad movies, just make movies! You learn so much valuable information throughout the entire filmmaking process, things that you can't learn in school or by reading books (although you should definitely do all of those things too!). Also, don't be afraid to have other interests. As an artist I firmly believe you and the projects you make/work on are only as interesting as the life experiences you have to pull from. Therefore, make time to travel, ask questions, talk to [safe] strangers, say yes to adventurous opportunities, and continuously push yourself to "buck the norm." I promise you, your work will only benefit from it.