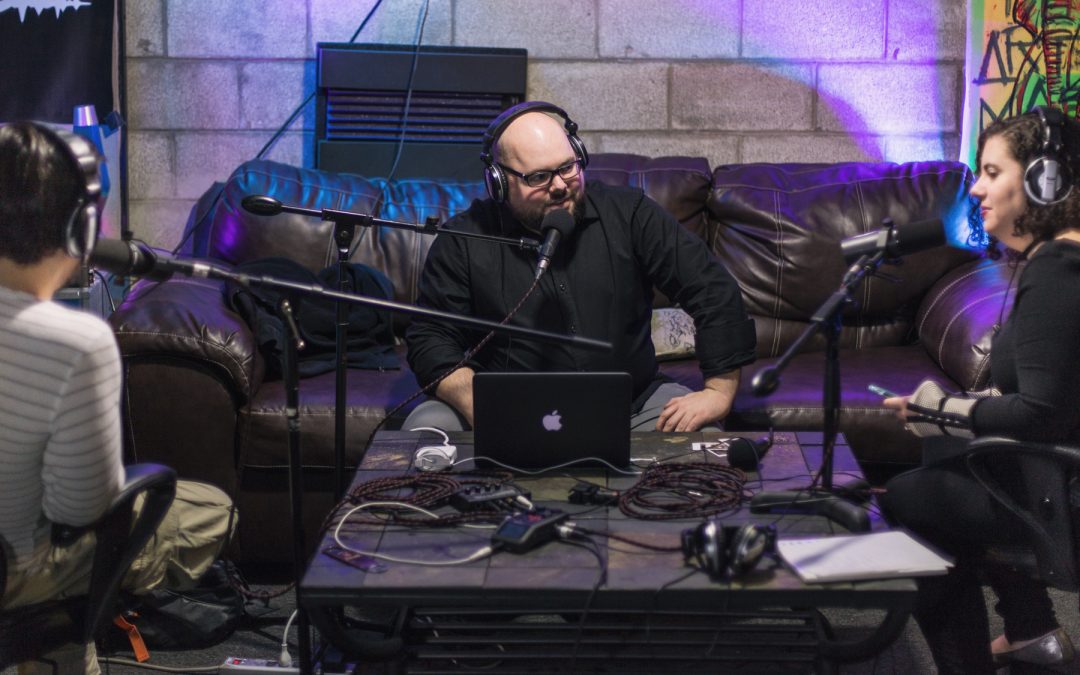 Sometimes We Get Kind of Heavy

A conversation with the three indie filmmakers and cinema aficionados behind local podcast The Cinema Psychos Show.

Brian Cottington, John Wooliscroft, and Elaine Wooliscroft came together to craft a podcast that fell somewhere between the haughtiness of traditional film criticism and the campiness of drunk podcasting. “No movie is above entry into the madhouse, be it the finest filet mignon of cinema or the greasiest fast food of cinematic schlock,” they proudly proclaim in their bio. Film Pittsburgh’s Candace Opper talks to them about how their show got started and balancing digital media with making art.

Candace: Tell me how your podcast got started.

John: We met at Chatham in the MFA program and have stayed friends and collaborators since. At some point, Brian approached us about doing a podcast about cinema. I was a podcast virgin coming into this (laughs). They had dabbled in it, I had not.

Elaine: Yeah, I was already podcasting. I have another show about middle grade fiction books (Super Serials) that I had been doing for a while when Brian came to us with the idea.

Brian: I’d done a previous podcast with a friend who I’d made some films with, but it wasn’t legit. It was more of a live thing that we’d just record and stream. I got back into podcasting because, as a filmmaker, I was thinking about ways to grow an audience. I heard an interview with Kevin Smith who suggested podcasting to filmmakers because it’s something free you can do to engage with your audience and it doesn’t take a whole lot of time. That part’s kind of wrong, though. It does.

E: Well, it does for us because we treat it like a full-time commitment. We record every week and take it very seriously. I don’t think all podcasters do.

B: The initial idea was, I could use the podcast to say to my audience, “Hey, I’m working on this movie, go and check it out.” But as we got going we thought more about how to differentiate ourselves from everybody else out there. Movie podcasts range the gamut from high-brow criticism to drunk people talking about movies. We wanted to be somewhere in the middle—delivering quality critique and tackling some issues that maybe the “drunk” podcasters wouldn’t.

J: Also not taking anything too seriously. I mean, we take the process seriously but are able to step back and laugh at anything.

E: Sometimes we get kind of heavy. It’s easy to get sucked into a conversation and suddenly end up talking about dense social issues because art reflects what’s going on in life. A lot of horrible things have happened since we started this show. It changes the tone a bit, but if those moments happen we don’t stop them.

C: So, what’s the elevator pitch for your show?

E: If you like listening to horrible people talk about movies our show is probably for you (laughs).

B: I think our official line is “Vulgar yet smart film critique.” 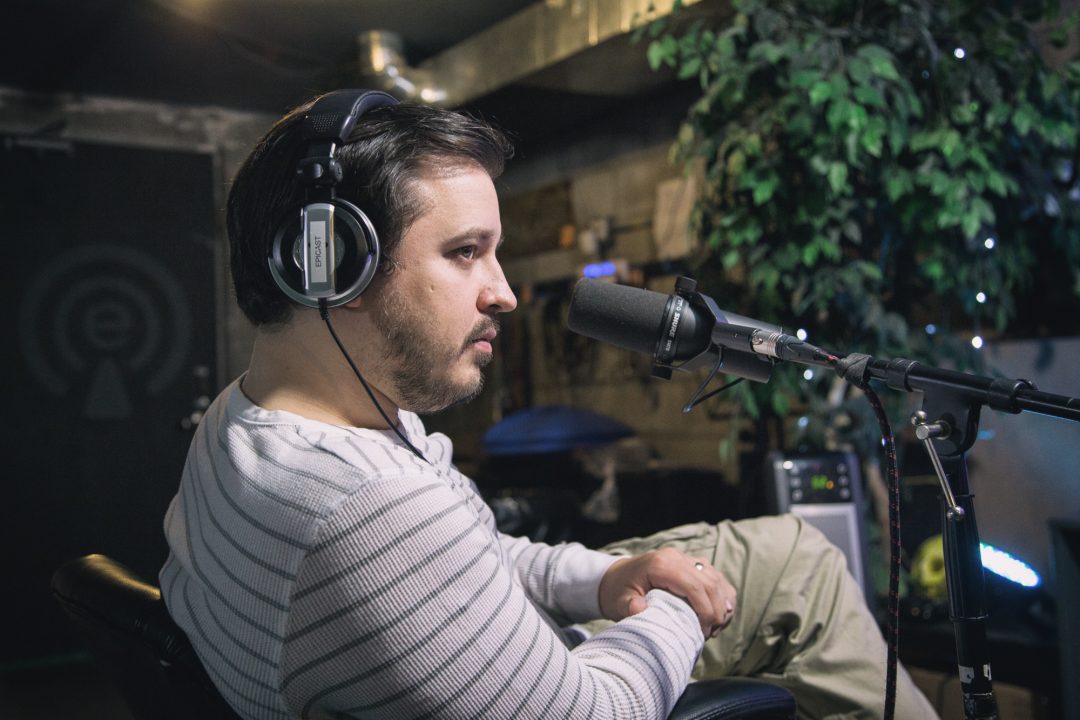 C: How much planning do you do for the show?

J: I look ahead at the year and think about what movies I think people are going to want us to review. We usually try to release an episode a week or two after the movie’s been out because we can’t help but do spoilers.

B: We try and it doesn’t work.

E: That’s a choice that we made. Some podcasts don’t do spoilers. We decided to, but we’re very explicit about it.

J: So, I pick out new releases first, then insert holiday-themed films that make sense. From there, I plug in other types of episodes that we do, like film topics and interviews, and that fills out the year.

E: We have segments with film-related news, too. It often ends up being about an actor that died, but recently there were the Harvey Weinstein allegations, which we covered for a few weeks because there were updates all the time.

C: Let’s say you’re doing a critique on a new film. Do you guys consult each other’s opinions before you start?

E: John and I are married so we usually see the movie together and we try not to talk about it.

E: The show’s better if you wait to fight about it later.

J: And we’ve had some of those fights. 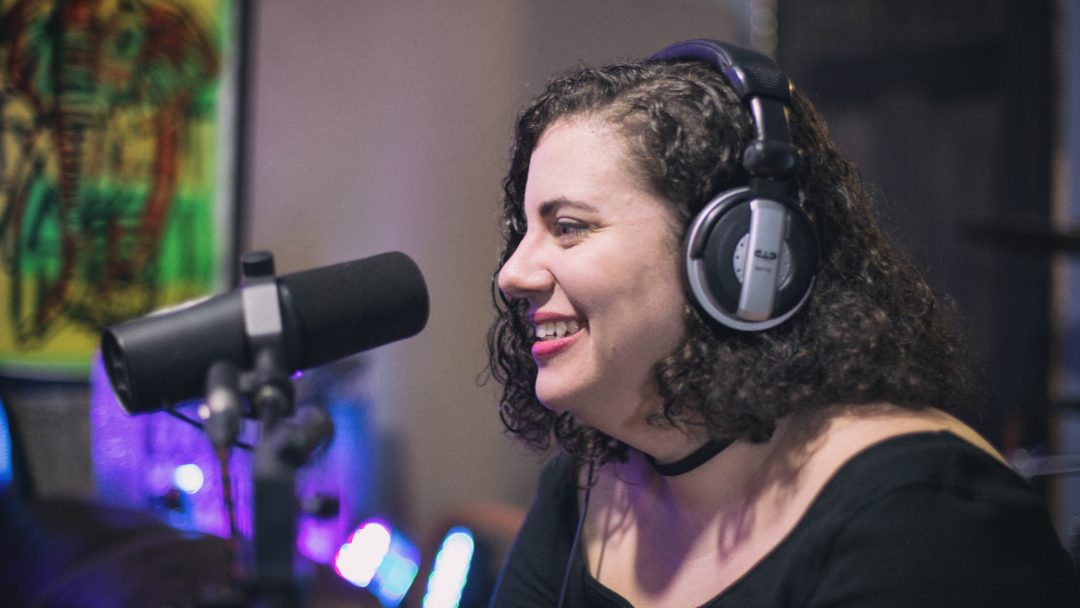 C: What’s the response been to your podcast? How do you track that?

B: We can track downloads and where those downloads are coming from, and we’re around the average podcast, which gets about 200 downloads per episode for a week’s time. We end up somewhere around, 150-160 per week, which isn’t bad.

E: And it’s been a steady climb.

J: It’s constant growth and change. Some types of episodes seem to do better, but sometimes there’s no rhyme or reason to it. We might think an episode is going to do great and it doesn’t, and then something else will completely surprise us. We’re constantly having to adapt to expand the audience.

B: To give you an example, one of our most popular episodes—and still I have no idea why—was an episode on vampire movies. It’s been consistently on top. It’s still getting downloads.

J: These two sometimes hate me because of the movies I make them go see, but two of our most downloaded episodes were Power Rangers and the Blair Witch remake. They were so mad, but look at the numbers! (Laughs)

C: Do you feel like participating in digital media has helped you stay engaged as filmmakers?

E: I think to make yourself a whole person and a whole artist, I’d strongly recommend it. The podcast keeps me critically thinking, and it makes me smarter and more well-rounded. I engage with the material more. It seamlessly fits in with my greater artistic goals and the artistic side of my personality.

J: I would say that I’m as much a film fan and a film critic as I am a filmmaker. At least now I’m recording it instead of just yammering on to whoever will listen. (laughs)

B: For me, it’s a creative outlet, you know. I work 9 to 5, I also teach in the evenings. I like having something that I create every week and put out there to an audience—even if it’s not a film. I basically work on one short film a year and the podcast fills that creative void between making movies.

C: How do you feel Pittsburgh is as a community for filmmakers?

E: I think there’s a nice sense of camaraderie. The more people I meet, the more excited I get about it, and the more I feel like I did the right thing in moving here, just to be part of this great community of people who are doing great work. It’s so energizing.

J: You know, it used to be if you were in any way involved in film or TV production here, it was Mister Roger’s Neighborhood or something with WQED. It’s grown so much since then.

B: I think on the indie level there’s a huge groundswell of support and talented people to get a short or web series off the ground. But I don’t see it with the major motion picture or TV production side. The way I’ve seen it, Hollywood comes in for the summer, they shoot their stuff, and they leave. There aren’t many employment opportunities for the indie filmmaker who maybe isn’t able to get into the unions. The local industry would be better if the resources were put towards getting more of these productions to stay here and establish roots here instead of just coming in during the summer months to shoot and leaving. 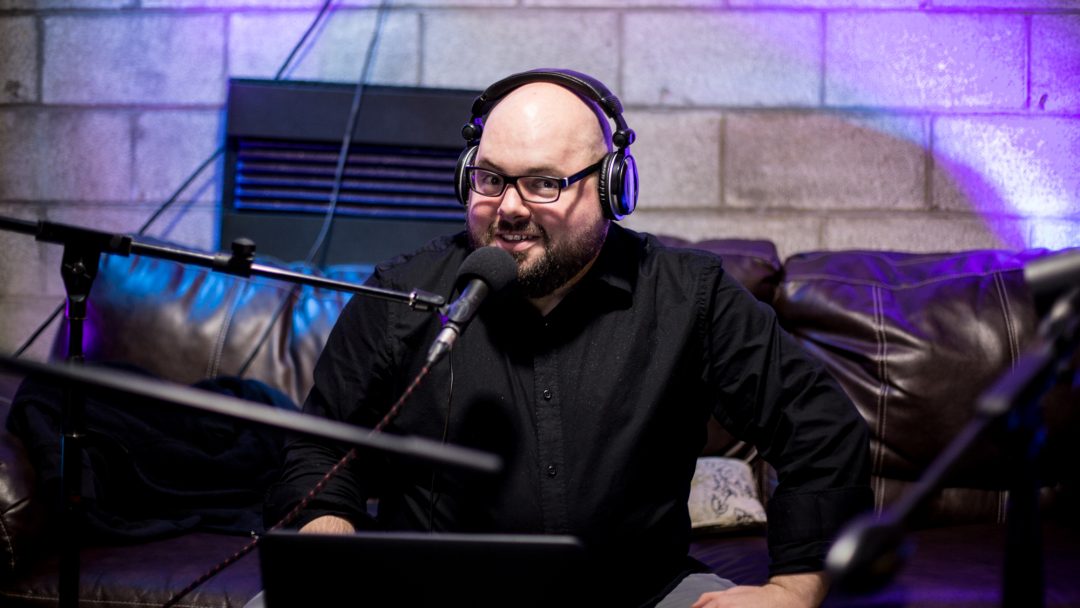 C: Yeah, based on conversations I’ve had with other local filmmakers, it seems like there’s a rift between the major Hollywood productions and local indie filmmaking. How can Pittsburgh support the indie filmmaker who wants to produce their entire film here from start to finish?

B: Pittsburgh needs to have more of an infrastructure in post-production. I specialize in post-production and visual effects—if I’m a professional and I don’t keep my skills sharp enough then that’s not really going to help me down the line if I’m applying for jobs anywhere else. We need to work on that infrastructure so these major productions can either stay here partially, or at least offer more opportunities to local filmmakers.

E: A lot of these big organizations may just underestimate Pittsburgh. There’s so much talent here that if the resources were allocated or if Hollywood were to set up more permanent roots here, I don’t think anybody would be disappointed at the result.

C: What are you all working on besides the podcast?

J: I’m launching a YouTube channel later this year that explores film from some different angles. Like, can you appreciate a film from a filmmaker who’s had a huge scandal? Or can you see Kevin Spacey’s movies in the same light as you did before? Also I revisit movies to see if they hold up. Some of it is just me ranting and raving, but some is research-heavy. I think between the podcast and my YouTube channel, I can create steadily and feel fulfilled. Be on the lookout for it in September, hopefully!

E: I’m restarting my other podcast (Super Serials) since we’ve been on a bit of a hiatus. It’s me and two friends reading some of the books we read—and sometimes didn’t read—as kids. It’s cool to go back and, like John was saying, see if they hold up. I’m always checking to see if they’re inclusive or feminist, and how those issues play out. Spoiler alert: The Sweet Valley books never hold up because the characters are terrible people. (laughs)

B: For me the big thing is the podcast. Aside from that, I’ll be making a short film for the opening of the Morose & Macabre’s Atrocity Exhibition. It’s a 360-degree living art exhibition that features independent artists from all over the world who do macabre art. I’m producing a film that communicates the theme of the show, which changes every year. I started working with them in grad school and it was my first experience getting my work in front of an audience. Doing those films has improved my craft. We’re on year ten—hopefully it goes to eleven.

Find The Cinema Psychos Show at CinemaPsychosShow.com and wherever you download your podcasts.