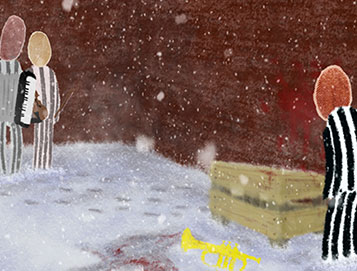 This animated film tells the story of a father and son imprisoned in a death camp. The son, a trumpet player, is auditioning for the camp’s orchestra to improve his chances for survival. Leaving his father behind, he walks through the cold snow towards the auditioning site where a firing squad waits to decide whether he is admitted into the orchestra.

This film was also shown as part of FilmPittsburgh Teen Screen program.